Cactus, Super Food of the South

It has taken me several years of living here in California, at the same latitude as Morocco, to begin to make friends with Native plants. Its not that I never saw a cactus in Canada...they do grow....but they are stubby little things, often bent over, low growing and tiny enough to make one wish they had never worn sandals on a hike. I saw cacti every winter when I visited my parents on their winter sojourn to California, and also when I lived in Mexico for a year but somehow they had always been a part of the exotic foliage. Beautiful strangers, not friends.

Last year, when I was still making fermented drinks like kombucha and water kefir, I had read that that some people thought that some of the first "grains" for making water kefir had come from the cactus, found as little crystal like deposits on the cactus. I thought this was interesting, but couldn't find any more information about it. I asked as many Mexican Americans as I could and none had heard of his. Then I found this web page: "World's Best Water Purifier May Be The Cactus"

This is what scientists have discovered that the Mexican Natives probably knew for centuries:

"Scientists from the University of South Florida have discovered the water purifying power of the prickly pear cactus. An extract from the desert-dweller is very effective at removing sediment and bacteria from dirty H2O and, even better, it grows all around the world.

The scientists aren't the first to realize this plant's ability. Nineteenth-century Mexican communities used the cactus as a water purifier. The thick gum in the cactus that stores water is responsible for the purification. The scientists extracted the gum and then added it to water that had been dirtied up with sediment and bacteria.

The gum caused the sediment and bacteria to combine and settle to the bottom, filtering 98 percent of the bacteria from the water. The next phase is to test it on natural water.

The scientists see communities in developing countries using the cactus on daily basis. They could boil a slice of it to release the gum and then add it to water just like the scientists did. But there are hurdles to overcome. What resources would be necessary for widespread growth of the cactus for this purpose and how can people ensure the "treated" water is truly bacteria free? If these problems can be solved, cheap, clean water could be accessible for millions who are currently without. "

I was still excitedly thinking about this when I saw nopales in the supermarket, both the whole paddle and a bag of cut up pieces. 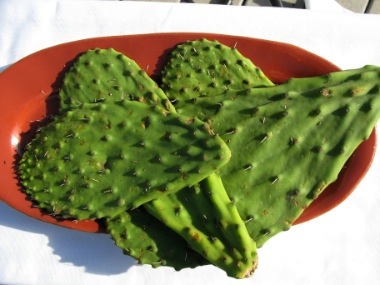 The nopales paddles have single thorns sticking out of raised parts in the paddle. 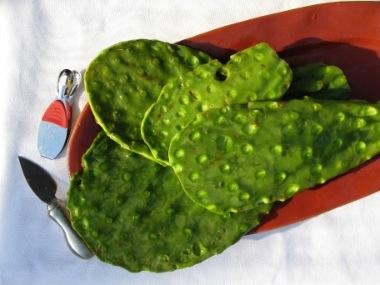 The best tools I found to remove the thorns were a strawberry huller and a small cheese knife. I'm sure there must be a dedicated tool for this somewhere, but the little strawberry nipper worked well. 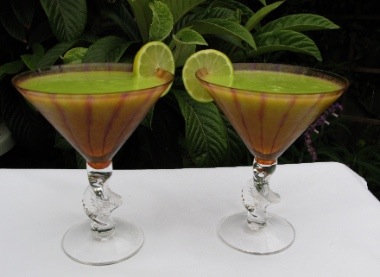 The idea that nopales could be used as a water purifier intrigued me so the first thing I wanted to make was a drink. In a high speed blender I combined nopales pieces, ripe mango, fresh young coconut water, coconut kefir, lime juice and ice cubes. Ahhh...it was Heaven! Refreshing, delicious and thirst quenching. 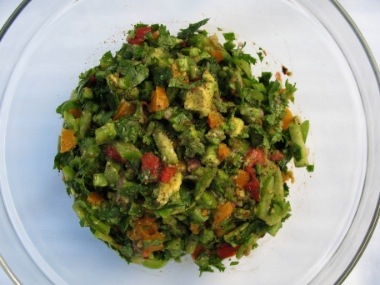 The next experiment was a salsa with tomatillos from the garden, heritage tomatoes, cilantro, avocado, slivers of red onion, lime juice, cumin, cayenne, corriander.......all the usual salsa ingredients with this one added surprise. When I eat nopales I feel the hydrating effect throughout my body. The salsa was delicious and it was also a hydrating medicine. 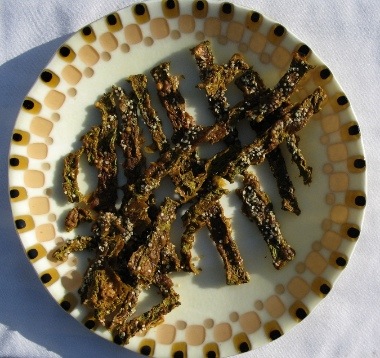 Dehydrating into a cactus jerky came to mind. I sliced the cleaned nopales paddles and massaged an Asian inspired sauce onto the strips. As I was doing this I was thinking of all of the different kinds of sauces I could marinate these strips in. I mean, how many kinds of beef jerky are out there? ( I don't actually know, having never looked at the stuff, but there must be different kinds). Once the strips were marinated, I sprinkled hemp seeds on them, thinking that I could also use sesame seeds. The strips were lined up on teflex sheets on dehydrator trays and dehydrated for hours at 105. Once dried, they must be stored in lock-tight glass containers with a desccicant inside because the whole nature of the cactus is to capture and hold water. I love these chewy morsels.

So now I feel like I know this cactus a little better. She is becoming my friend. I have planted some on the South side of the garden. The next time I go to the desert, I will go to meet friends.

Nutrients:
Vitamins: A, B1, B2, B3 and C
Fibers: lignen, cellulose, hemicelluloses, mucilages, pectins, gum
Minerals: calcium, magnesium, iron, sodium, potasium
Amino acids:
17 amino acids (including 8 of the essential which must be ingested as food), in the form of easily digestible protein

Wouldn't it be great to re-introduce this wonderful plant to the Native populations and to make it available to everyone? It grows easily on land where nothing else will grow. I'm so excited about this plant.

I found a website that makes an extract of nopales.

Posted by Silani Wahlgren at 10:52 PM No comments: 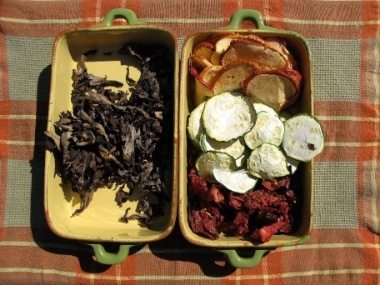 When I first began to make raw food I couldn't imagine how to create that slow simmered thick goodness that one gets with cooked sauces like marinara sauce or with dips, like hummus. Even the recipe books, in the case of raw zucchini hummus, will say that it's not as thick as hummus made with cooked garbanzo beans. I thought of that cooked down juicy goodness in apple pie...surely that must be impossible with raw food. Nope, it's not. Rich goodness begins by adding dehydrated tomatoes to a marinara sauce, dehydrated zucchini chips and extra sesame seeds to hummus, dried apple chips to the sauce for apple pie and......I haven't gotten around to making a mushroom gravy, but I will.

I hadn't imagined the bonus of zucchini chips tasting sweet and delicious, or my own "sun dried" (in the dehydrator) tomatoes added to so many dishes. I'd eaten apple chips before, but when marinated in lemon juice and cinnamon then dehydrated at 105 degrees, they achieve a whole new level of flavour. 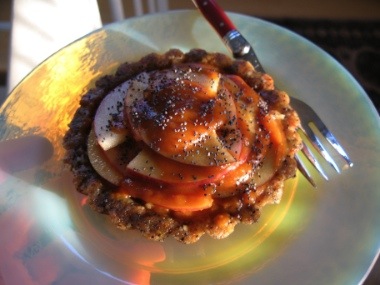 The sauce for this raw apple pie was made with apple chips, dates, goji berries (for the warm delicious colour as well as the nutrients) and some water, whipped to silky smoothness in a high speed blender. The crusts had been made before hand and refrigerated. The ingredients are simple: walnuts, dates, goji berries, a few raisins, and vanilla pulsed in a food processor. Press into a form with a removable bottom and freeze or refrigerate. The apples are quickly sliced in the food processor, so the pie goes together, with layers of sauce and layers of apples, making a delicious apple pie dessert. 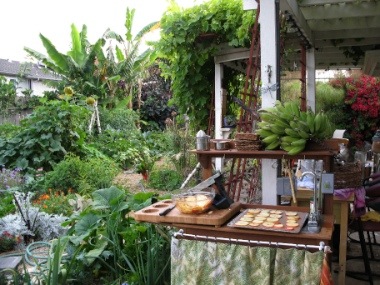 Here, laying out apple slices to go into the dehydrator. 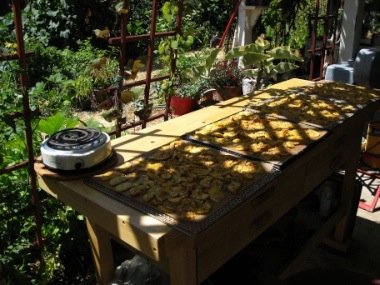 The latest, warm from the dehydrator, item in the "dried and ready to eat or make a sauce with" are spicy crooked neck squashes which are plentiful in the garden right now. These chips are delicious! Here, laying out the slices, marinated in sauce, in the outdoor kitchen. 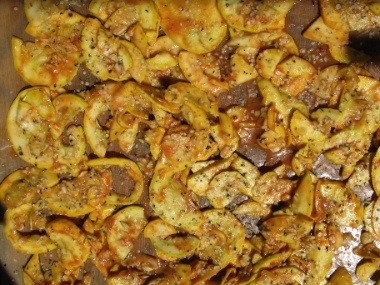 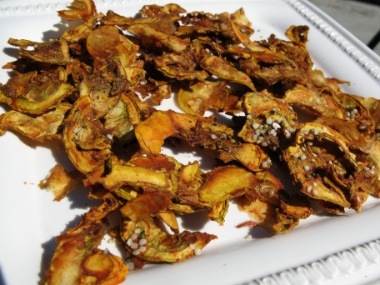 In this batch, there won't be enough left to make a sauce with. These are the best chips I've ever tasted! The marinade was made with a little tamari, olive oil, garlic, some red pepper, a seeded heritage tomato, some onion, lemon, a touch of avocado honey, turmeric, cayenne, oregano....all whirled in the blender and taste as you go to balance. Hemp seeds were sprinkled on top, but they didn't stick very well.

It's exciting to be keeping up with the pounds and pounds of produce from the garden this year, making things I hadn't even tasted this time last year.

Posted by Silani Wahlgren at 3:49 PM No comments: