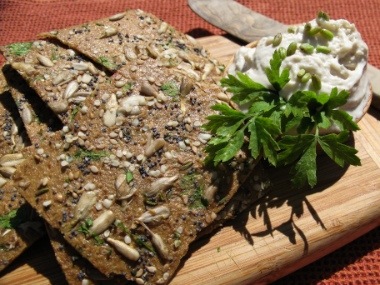 If you like the taste of onion seed bagels but want to avoid the wheat, calories and baking that a traditional bagel brings, try these fabulous onion flatbreads.

There are two recipes today that use sunflower seeds, so the first thing to do is get about 3 cups of sunflower seeds soaking. Some chefs only soak seeds for an hour or so, but I like to sprout the seeds, so they soak overnight, I rinse them and let them grow for a day, then make these breads. Don't forget to put flax seeds on to soak.

Have I introduced you to Golubka's blog yet? I found these delicious flatbreads here.

I make these breads in a high speed blender instead of a food processor. It really doesn't matter, except for how you process the flax seeds.
2 medium onions, cut into large pieces for the blender to handle.
1 cup of sprouted sunflower seeds (you will use more later on the top of the flatbreads)
4 tablespoons tamari or nama shoyu
4 tablespoons olive oil
1 cup flax seeds BUT if you are making them in a high speed blender and have soaked the flax seeds first, you will have what looks like a little flax cake. Once you have blended the other ingredients, cut the flax into strips that will drop through the feed hole in the top of your blender. With the blender on high speed, gradually feed in the strips until they are blended to the consistency you like (some like to have some whole flax seeds in the bread, some don't). If you don't have a high speed blender.....don't do this!!!! Your blender will choke and die quite quickly. If a Vitamix overheats, it simply stops until it cools down (or you put it in the freezer for awhile). If a regular blender becomes overburdened, the motor can quickly burn out.
If you are making these in a food processor, pre-grind the seeds in a coffee grinder or dedicated seed grinder and add them after you have processed the other ingredients. If you are using a regular blender, you have cut the onions smaller, for sure, and you can put the blended mixture into a bowl where you have already placed the flax seeds. Be ready to stir like crazy before it clumps.
(I know I said all this in part 1 but I don't want to feel responsible for your fried blender or sad, lumpy flatbread).

It's all good. This is not brain surgery or rocket science.

Place teflex sheets on your drier shelves and spread the mixture out. Now for the fun part....find every delicious kind of seed you have in your pantry or garden and you are ready to create the topping. I found fennel and parsley seeds in the garden and poppy, hemp, sesame in the pantry. I corse ground some coriander on top and sprinkled the rest, with lots of the sprouted sunflower seeds. Chop parsley leaves and sprinkle. Golubka has a wonderful tip for the next step. Wet your hands and press the seeds and leaves into the mixture. (I used to have problems with the seeds falling off in the dehydrator or when cutting, but no more. Wet hand patting really embeds the seeds into the mixture.)
That's it! 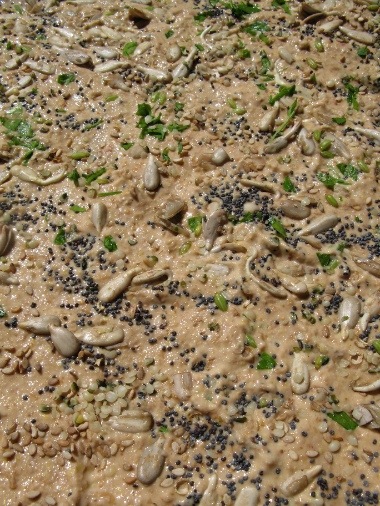 Dehydrate at 105 degrees until they are ready to come off the teflex sheets. Turn them over, remove the sheets, dehydrate some more until they can be cut with a knife, scissors or a pizza wheel. Dehydrate a little more to dry the edges. If you want them really crispy, dehydrate longer. For a bread, leave the pieces bigger. Great for bruschettas. Crispy, they are fabulous with new cashew cheese.

I said there would be another recipe today but I'm out of time. Put those extra soaked seeds in the refrigerator until tomorrow. They will be fine.

Posted by Silani Wahlgren at 2:24 PM No comments: 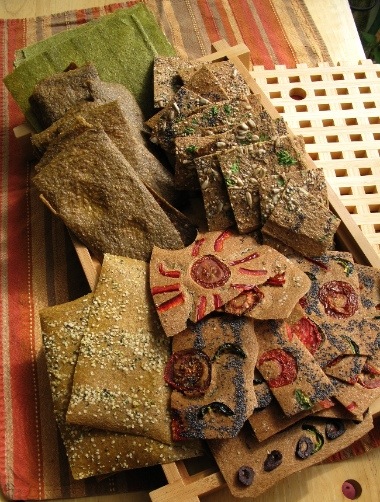 Often when I tell someone I'm eating a mostly raw diet I can tell they are imagining nothing but an endless parade of salads, and it seems bleak. Nothing could be further from the truth. Raw food also includes a variety of flat breads, crackers and wraps, all dehydrated at 105 degrees, all gluten free and delicious.

Wraps are flexible squares that can be made into many different dishes. They can be made from a variety of vegetables, with the addition of flax or chia seeds for flexibility and nutrition. The green wraps at the top of the photo are adapted from a recipe by Russell James in his E-book Thai Recipes. These green wraps are based on a Russell James recipe from his E-book Thai Raw Recipes.

The wraps on the lower left, covered with hemp seeds, were made with zucchini, tomato and tomatillo.
Green Wraps: 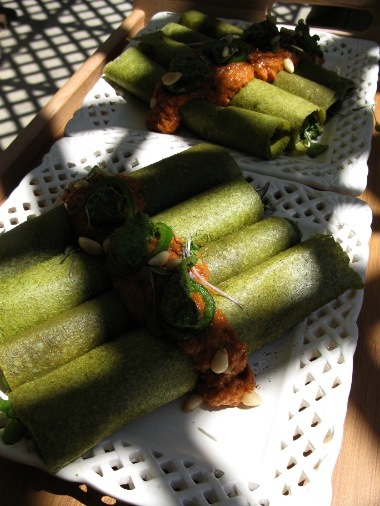 Shred zucchini in a food processor, enough to make about 5 and a half cups.
Put into high speed blender with:
1 tablespoon lime juice
3 tablespoons olive oil
1 1/2 teaspoons ground coriander
a pinch of salt
Blend.
Now to add some flax seed. You need about a quarter cup........it can be more if you like. My favorite way to use flax seed is to soak it, so that it wakes up its potential and almost begins to sprout. When it does this it looks almost like a cake. I cut it into strips and feed it, a little at a time into the blender. (Too much at once will cause it to overwork and shut off). Some people just grind flax sees, put them in a bowl and add the other blended ingredients to it, stirring furiously so it doesn't clump. The least nutritious option is to buy already ground flax seeds, but they tend to be so delicate once ground that it is easy for them to become rancid, so this is never an option I choose.
Pour
Pour onto teflex sheets which sit on dehydrator shelves, spread out into large squares covering the sheets. These will later be cut into 4. Dehydrate at 105 degrees for as many hours as necessary, so that they are dry but still flexible.

They can be rolled, as in the raw cannelloni above which has a pesto cashew cheese inside and a raw marinara sauce on top. Cucumbers, salad vegetables, raw hummus and raw baba ghanouj are all delicious and quick meals rolled into one of these wraps. 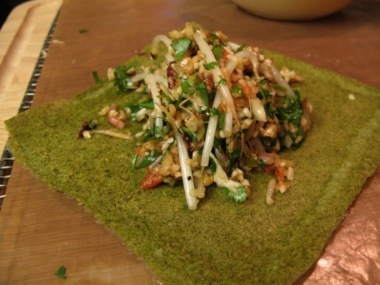 One can also make envelopes by putting a filling in the center, wetting the edges and folding them toward the center, overlapping a little, then turning them over so that the folded corners are on the bottom. This particular mixture is made with home sprouted mung beans, shitake mushrooms, shallots, red pepper, Thai pepper, cilantro, lime juice, tamari, corriander seed, cumin, sesame oil, sesame seeds, tamarind, and some Indonesian comet tail pepper. 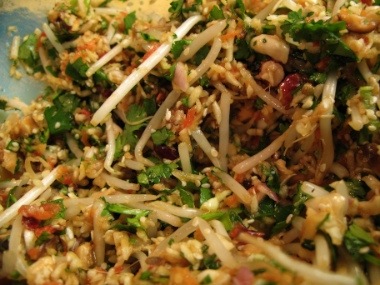 Place in the dehydrator until the envelope becomes somewhat crisp and the filling is warm. 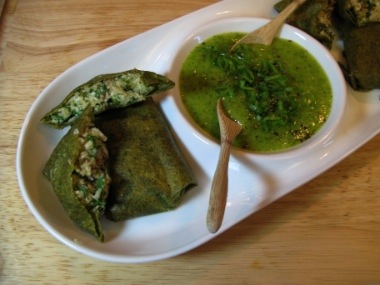 Dipping sauces can be made from blending fruits in season, like peaches or mango, with cucumber, lime, Thai pepper, cilantro, green onion to garnish. They can also be more like a salsa or a marinera sauce, depending upon the filling you have inside the envelope. Savory or sweet, spicy or mild.
In the next post, hearty walnut cumin flat bread and chewy onion mulit-seed flatbread.
Posted by Silani Wahlgren at 4:09 PM 1 comment:

It was time to harvest some eggplant.
I don't know why I forgot to photograph the nice plump vegetables.

Here is the eggplant when it was still a flower. 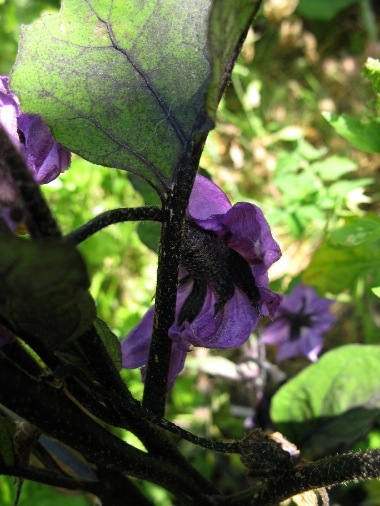 I had found a recipe that talked about freezing then thawing the eggplant to soften the texture and the taste of the raw eggplant. I chopped up a few of the long thin Japanese eggplants from the garden, put them in the freezer, put some cashews on to soak and went on with my day.

Here is the recipe I found which uses a food processor to make the baba ghanoush. (We spell it differently......it's the same thing).
I used a Vitamix blender.
Throw everything in together:
2-3 cloves of garlic
a half cup of previously soaked cashews
a double handful of diced, frozen and thawed eggplant
juice from half a lemon (I actually peeled it, took out the seeds and put half of the lemon in the vitamix)
2T olive oil
a couple grinds of salt
Moroccan spice blend (add whatever Mediterranean spices you like or leave it plain).
Blend until its silky fine.
Make a well in the middle to put some fine olive oil in. Add sprigs of parsley and kalamata olives around the outside add a grind of good black pepper.
Really, this is the only thing I've made this year that I haven't photographed the first time I made it, but I was too busy eating it with a variety of flatbreads that I've made to even think of photographing. Maybe next time. I love baba ghanouj and I'm excited to find that I can make it easy and raw and delicious. 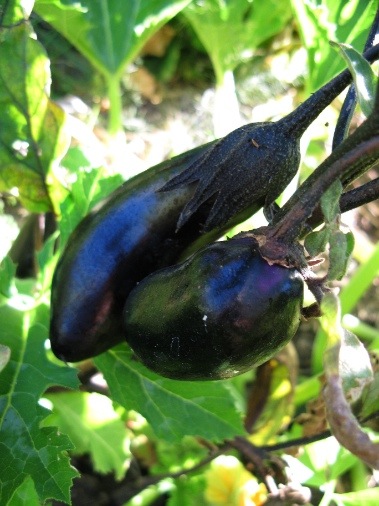 Posted by Silani Wahlgren at 8:42 PM No comments: