February is usually a busy month of celebration for us.
Valentine's day, James' birthday and our own yearly holiday: Pumpkin Day.

Pumpkin day occurs any day of the month in February. It notes the cooking and eating of the last pumpkin from the fall harvest. Before we began eating mostly raw food, we took delight in cooking the entire pumpkin in the oven, like a turkey.
I was wondering how we would celebrate Pumpkin Day this year, with raw food. I began to think that a pumpkin cheesecake would be fun and could also be James's birthday cake. 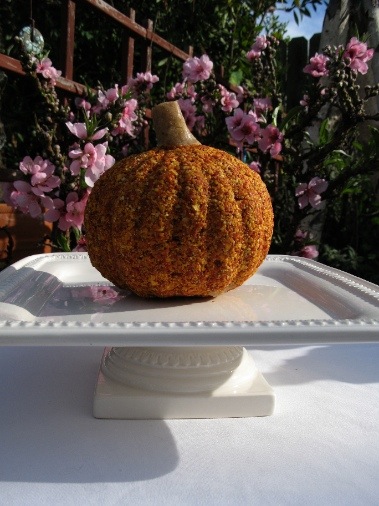 This year, while all three of these celebrations are happening in the same week, James is also leaving one job to begin another. At long last, he will be working from home, which will change aspects of our day to day life.

Because of this, I wanted to make a dessert that we could share. 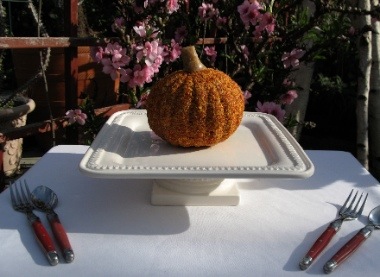 *(just as a matter of scale, the spoons and forks are tiny dessert sized, not regular size.)

So, here we are, out by the little nectarine tree which has graciously burst into flower for the big week. 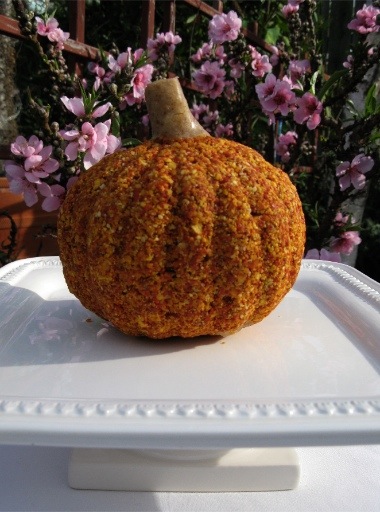 But there needed to be a twist, because of the surprise of the new job, and our new life about to begin. 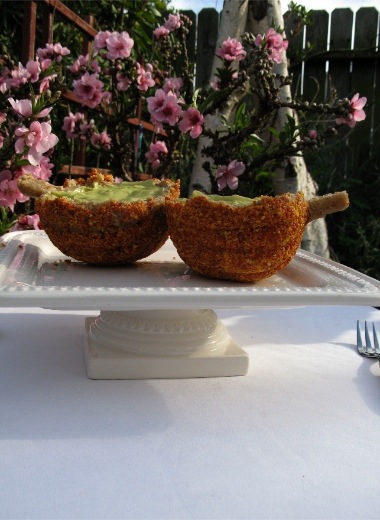 Green is for new beginnings, and as I was thinking about making pumpkin cheesecake I found some beautiful little ripe key limes, and a recipe for a raw key lime pie arrived in my mailbox.

So this is the Valentine Surprise....a creamy mango key lime pie, hiding inside the pumpkin like treats in a piñata. 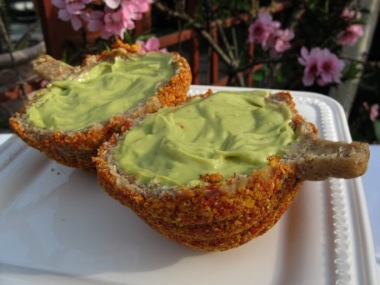 The basic recipe for our Pumpkin Day Surprise came from here.

The outer crust for the pumpkin was made by grinding dried mango, coconut and goji berries together.

PS: I made this and took the photos the day before partly because I don't like to stop to take photos in the middle of a nice dinner but also because I was testing the structural integrity of the form: the pumpkin shape. I didn't want it to fall apart while we were looking at it or while I was bringing it to the table. It needs to be refrigerated, but the form was strong, and worked well.

When I served it for dinner, I added fresh, plump blueberries to each half before I sealed them together. I served the pumpkin with an extra dish of blueberries. (The dark blue looked wonderful in the light green of the pie).

The combination of the creaminess of the key lime pie, the two layers of crust, with their different flavours and the taste and texture of little orbs of blueberries was truly a feast for the mouth! A guilt free, nutritious treat.

The recipe made this pie plus several small lunch pies and a try of thumb print cookies. I added some water to the extra outer layer (made of dried mango, dried coconut and dried goji berries) and this made a delicious mango jam to put in the thumb print indentation of the cookie. (I didn't actually use my thumb. I had a metal tool from a small mortar and pestle that I used.)

I did not use agave in the key lime pie. I used maple syrup, but less than suggested in the recipe. Because of that, I used a little less lime juice, to keep the balance of the taste.

Posted by Silani Wahlgren at 9:29 PM