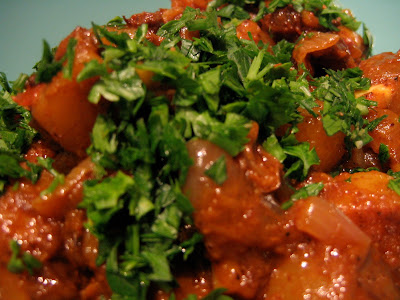 Peel the potatoes and pierce them with a fork. Soak in salt water for 1/2 hour. Bite size or a little bigger. Two bite size is good.

Grind ginger, garlic and dry red peppers into a paste.
(This one little sentence had me doing the craziest things in the kitchen. Suffice to say, sticking it all in the mortar and pestle and pounding does not work, at least not until some vegetable remediation happened. It helped to use different words. Mince the garlic, grate the ginger and chop the peppers finely, then put all in the mortar and pestle to make a paste with the ingredients. I left the seeds in two of the peppers, but that's optional.)

Cut the onions in half and slice thinly in half moons. ( I just cut the tiny onions I had in half). Drain the potatoes and sprinkle them with 1 teaspoon Turmeric. I enjoyed sprinkling turmeric on uncooked potatoes, for some reason.

Heat 1 Tablespoon of oil and fry the potatoes, at medium heat, until they are slightly brown on all sides. ( Go on, add a little butter...you know you want to...it helps them brown.) Scoop them out of the pan until later.

Add the rest of the oil to the pan. Add cinnamon, cloves, ( I totally forgot the cloves, but I added some coriander) and cardamon. When it starts to sizzle, add the cumin seeds. after 30 seconds, add the onions and fry them until they are glazed and slightly brown.

Although the recipe doesn't say to do so, I ground up all of the spices before I put them in.

Add the coconut milk, chopped raisins, garam masala and 3/4 cup water. Cover tightly and simmer at low heat until potatoes are fork tender. If there is more liquid left at this point, uncover and cook at high heat, watching carefully, until there is only enough to coat the potatoes and a bit more.

Sprinkle cilantro leaves over top once you have put all in a bowl or plated the dish. (It's not quite the same, but any kind of parsley works as well).

Lots of complex flavour and the best potato dish I have ever eaten! We ate the whole thing and didn't have anything else. The traditional way would be to serve parathas, kuchas or naan with it but that adds up to way too much carbohydrate.

It took me six months to get around to trying this recipe. It seemed complicated, reading it, but it's just sequential actions that add up.
Posted by Silani Wahlgren at 9:57 PM