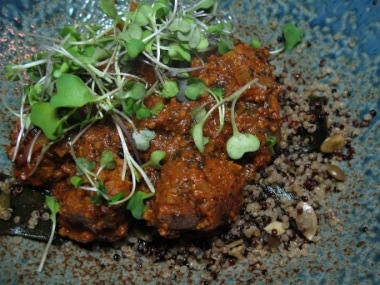 This lamb dish sits on a bed of tri-colour quinoa cooked with seaweed (kombu) and pumpkin seeds. This can be cooked ahead. 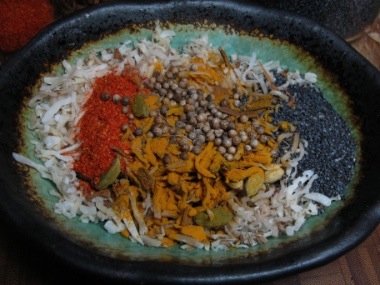 The fun part of this dish is making the masala, but first the lamb
needs to be marinated. I used minced lamb, because that's what I had.
Mix 2-3 Tbsp. yogurt, minced garlic and grated ginger into the lamb to
marinate. 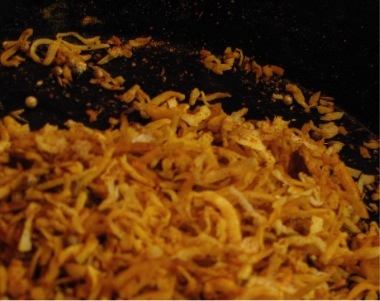 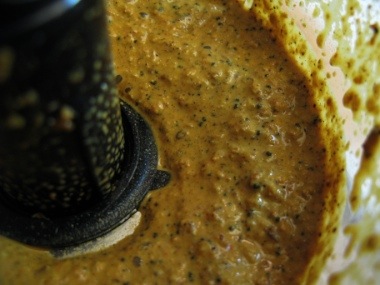 Masala:
2 tsp. coriander seeds*
cinnamon 2 1" sticks (I use ceylon cinnamon because it's sweeter and crumblier)
2tsp. poppy seeds*
4 green cardamon
4 cloves
1tsp. fennel seeds*
coconut half fresh or equivalent
Roast in pan until aroma blooms. cool. Add 2 tsp. Thai chili* powder (could be Kashmiri or red)
1 tsp. turmeric powder
2 green chilis*
handful of peanuts
Grind into a paste using just enough water and coconut milk to facilitate. I need a better mortar and pestle. I used a "smart stick" with a grinder attachment for most of the job.

Heat coconut oil in pan. Saute the onions. Once they are translucent
add some minced garlic, ginger and turmeric while cooking for a minute
more. Add half the cilantro leaves, the masala paste, some coconut
milk, one half chopped preserved lemon and the tomato puree. Simmer while you
brown the lamb balls in another pan to cook the fat out of them. 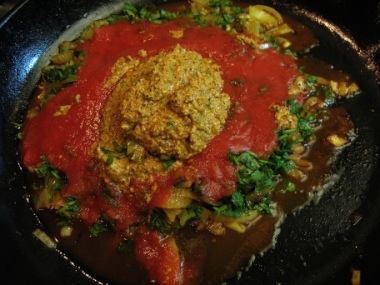 When the lamb balls have browned, drain on a paper towel then add to the masala sauce. Cover and cook on lowest hear for half an hour for mince to one hour for lamb chunks. Check occasionally to insure there is enough liquid and the bottom is not sticking or burning. Stir. 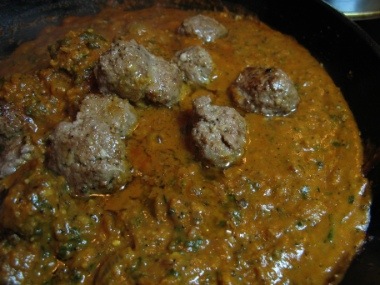 To plate, put quinoa in bowl and ladle lamb on top. Garnish with more chopped cilantro. I didn't have any more so I used micro greens. Still good! 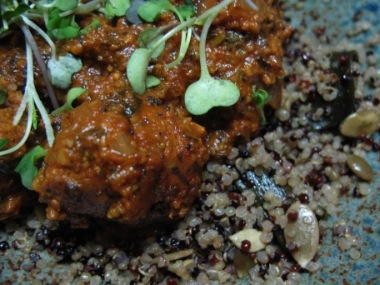 I find the preserved lemon keeps the dish from being heavy....I digest it better. (The Moroccan influence).

The peanuts just make the sauce creamier. (The Thai influence).

*means it comes from my garden.I never actually measure anything.

The inspiration for this dish came from here

Posted by Silani Wahlgren at 10:44 PM