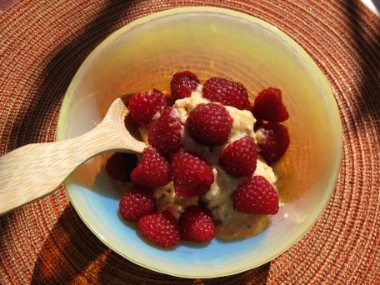 Sooner or later that question simmers, behind it, a little nagging voice arises and it is saying louder and louder: I WANT ICE CREAM!
Have you ever looked at the list of ingredients in commercial ice cream? Frightening!

Better yet, have you ever heard of One Ingredient Ice Cream?
That one delicious ingredient is Musa sapienta. It contains vitamin A, vitamin B6, Vitamin C, vitamin E and vitamin G. It contains potassium, calcium, phosphorous and selenium. It reduces blood pressure. It has been used to treat cataracts, for stomach ulcers, and contains pectin which inhibits colon cancer.*
Where do you find Musa sapienta, especially if you don't speak Latin? (Bad joke, no one speaks Latin). It's common name is banana and it makes WONDERFUL ice cream. Cut bananas into chunks and freeze. Then they are ready to use either in smoothies, or alone as a base for ice cream. One can add half a vanilla pod or fruit or cacao powder. Chopped nuts, dates or raisins would be good. Chocolate sauce if feeling a little decadent or lime zest, chipoltle pepper (just a little), cinnamon, kiwi, star fruit......almost endless in possibilities with almost instant gratification, as long as you have those banana pieces frozen. When that voice begins to nag, take out some banana pieces, whirl in the vitamix and put in a bowl. Best if you assemble all add-ons first so it doesn't melt.
I freeze the pieces, not touching, on a teflex sheet sitting on a cookie tray that fits inside the freezer. I put a smaller teflex sheet or a paper towel on top, let the pieces freeze then transfer them to a sealed container which I keep in the freezer. (yes, I once froze a banana with its skin on and then felt really retarded when it proved difficult to remove the skin.) Mashing the banana and freezing it in ice cube trays also works. One never needs to throw out over-ripe bananas. Just freeze them at their finest moment and enjoy later. 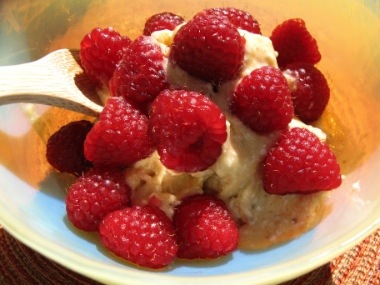 *Information about the banana from Natural News .
Posted by Silani Wahlgren at 6:13 PM