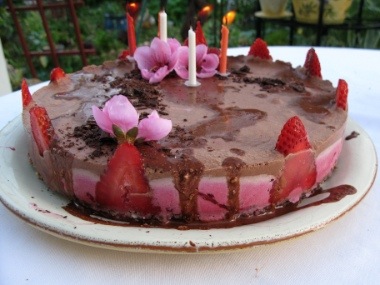 I made a birthday cake for my honey. It was OK, but not fabulous, so I'm not posting even a bit of a recipe. Following some of the recipes in RAW was probably the first time I've ever more or less followed a recipe. I usually get an idea, google for a recipe, look at four or five different ones then go create my own.

This time, I used a recipe from a cookbook that was created by someone I've looked up to for awhile. Now I see we obviously have different tastes, particularly when it comes to sugar. I made the bottom crust according to instructions, tasted it, then took only one quarter of the mixture and added a whole new batch of ground walnuts to it. It was still a little too sweet! Then a layer of strawberries....not much can go wrong there. The pink layer has raspberries and a little piece of beet to create more colour, and the top layer is chocolate. Both layers have cacao butter in them. Each layer called for half a cup of agave nectar but I put less than a quarter of a cup and still it was sweet. The chocolate sauce on top was just agave and cacao powder. That does not qualify as a sauce.

Sometimes we don't learn what we think we are going to learn, but still we learn big lessons.

I made the mistake of deciding to make this cake with a time pressure for a celebration so there was no chance to properly think it through and re-create the recipe in a way that would make sense to me. Nothing in the recipe said it was an ice cream cake, but there was nothing in the ingredients to make the cake set other than freezing it. It was supposed to be a mousse cake. Irish moss, a tiny bit of ground flax, agar agar.....any of these of these would have created some body in the mousse layers. Using this recipe as it is, without the freezer this would not have been a cake. It would have had no form at all and no separation of layers.


So, this post is not so much about cake, or eaven about food. It's about putting ones trust in oneself and not in other people, however much press or experience they've had. It's about understanding that their "product" might not be useful or helpful or even healthy for you. I was disappointed, then surprised and finally happy to find that I have my own strong aesthetic with raw food cooking. So I learned something good after all.

After a month and a half of drinking green smoothies and eating healthy food,  I felt heavy and unhappy after eating a slice of this. It was fairly delicious, but I'm interested in finding ways to create celebration dishes that both work as delicious food and don't add unnecessarily to the calorie load.
I'm going to be thinking about this and eventually I'll come up with a nice, raw, light raspberry/chocolate mousse.

This was just one step along the path, and it involved finding confidence in my own ability to create what I need.
Posted by Silani Wahlgren at 6:56 PM