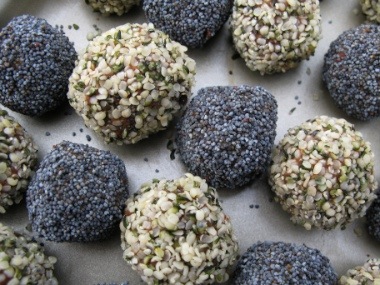 Sometimes just a bite of a treat is enough.
That's when I bring out the balls. I suppose I should call them truffles, but around here, they're just happy balls. 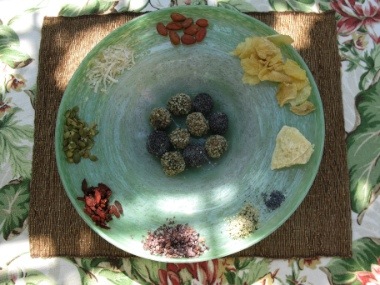 Here's what they are made of. There are no exact measurements. I put in varying amounts of each ingredient, depending on how much chocolate or other ingredient I'd like at that moment. The yacon is really all of the sweetening that's necessary, but some coconut palm sugar granules could be added for more sweetness. Taste as you go.

At the top (twelve o'clock) are cacao beans. They can be broken down in the vitamix to cacao nibs (at 6 o'clock), and then into powder. Leave some nibs if you like their chewiness. At 1 and 2 o'clock are yacon slices. At 3 o'clock is cacao butter. I also use some coconut butter (not shown), but this makes them softer, not so good for summer. At 4 and 5 o'clock (it's so anachronistic to be writing o'clock and using a clock face model) are poppy seeds and hemp seeds which can go into the truffle but I roll the balls in these. At 7, the goji berries. At 9, pumpkin seeds. At 10 or 11, angel hair coconut.

Soak the pumpkin seeds, goji berries, yacon slices and coconut. Strain and put into the dehydrator just long enough so that the excess water is off them. Put them all in the dry carafe of the vitamixer and blend them all to a nice consistency (or chop by hand with a mezzaluna), some of the coconut can be reserved to add in later for texture. Melt the cacao butter and coconut butter slowly, keeping the temperature low. When melted, stir in the mixture. roll into balls and then roll in hemp seeds or poppy seeds. Refrigerate.

I began to make these when I decided that I could have chocolate whenever I wanted, as long as I began with the whole cacao bean. Spending the time making these, and other chocolate treats certainly cuts down on my chocolate consumption.

Posted by Silani Wahlgren at 9:43 PM