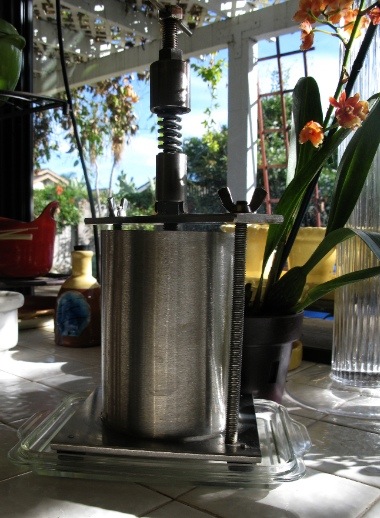 This is a cheese press that I normally use for cultured raw goat's cheese. This is the first time I'm using it to press a cultured cashew cheese.

I'm so excited to be making this cultured cheese, because I was sad to think that if I jumped into this raw diet I would have to give up making my coat's cheese. I hadn't considered that one might use a culture with nuts to make a cheese. Roxanne Klein uses rejuvalac, made from wheat. I didn't want to do that. I've used young coconut kefir and it worked beautifully.


Soak 3C of raw cashews for 10-12 hours. Drain.
Add 1/4C. young coconut kefir
1/2tsp. Celtic sea salt
Blend in high speed blender until smooth.
Line a sieve with butter muslin (thicker than cheese cloth). Cover the top with a lettuce leaf, leave to ripen in a warm place for at least 12 hours. Excess liquid will drop out.
Remove the cheese and shape into a log or round or put into a cheese press if you have one. Put it in the refrigerator to firm up. Use within three days. (See if you can actually hoard it away that long). This cheese is delicious!

I've since tried some variations. One was to put the cultured cashew cheese in the blender with red peppers and jalapeno pepper to create a spicy cheese with a zingy red-orange colour.

This is some interesting research:  Comparing raw and non raw cashews

"Here's a fascinating insight from Habib Bailey, a leader in the raw food movement when it was in its infancy:- I imagine that many of you raw folks have been told that all cashews are not truly raw, because they've been heated in the shell before being opened. Well, I'm here to give you some news that will be very well received by everyone who loves the rich, creamy consistency that cashews bring to many delicious raw recipes.

A long time ago, I also heard that cashews are heated in the shells. I did find out that it is true. But rather than simply leaving it at that, and never eating them again, I reasoned that whether they were truly raw or not depended on whether or not enough heat made it through the shell, to actually alter the nuts themselves. You see,the reason they are heated, is that there is a caustic substance coating the inside of the shell, that will burn the hands of those who open them for processing. They are briefly heated in order to disperse this natural, caustic agent. I heard that the heating didn't need to be very long, in order to accomplish this. This is what caused me to begin questioning how much heat actually made it through the shell, and whether it was of sufficient duration to actually
alter the nut.

So I devised an experiment:

Nut cheeses made from raw nuts virtually always came out right. They tasted good, and had the kind of "pleasantly sharp" taste you get from the growth of healthful, beneficial bacteria. Similar to the kind that grows in good, live sauerkraut.

On the other hand, the nut cheeses made from nuts which were NOT labelled as raw, ALWAYS ended up spoiling. There was in every single case, a bad smell, and a bad taste. They were full of putrefactive bacteria, and had to be thrown away.

NOW FOR THE CLINCHER: If you make the same conclusion from these results that I did, you would also reason that if a nut cultured properly, then it MUST have been raw....

Well, I will tell you: every single batch of cashew cheese that I have ever made from cashews that were labelled as raw, ALWAYS cultured properly, and came out tasting and smelling very, very good... with no putrefactive odor or taste at all. In fact, whenever I have given samples of this cheese to people who haven't tasted it before, their eyes widen, and they have to have the recipe...

AND just like all the other kinds of nuts tested, every batch of cashew cheese made from cashews NOT labelled as raw, ALWAYS SPOILED.

So the only possibility that makes sense to me, is that although cashews are most definitely heated in the shells, that not enough heat makes it through the shell, and not for a sufficient duration, to detrimentally alter the cashew nut itself.

I have shared the story of my "experiment" and conclusions with many raw food teachers. Usually they are very glad to hear of it, because the cashew is an extremely versatile, tasty nut." by Habib Bailey

I 'm glad I waited on making this cheese until my order from a raw food company arrived. I used cashews that are organic, truly raw and hand cracked, from Indonesia. The batch of cashews I bought before that tasted of salt, even though they were supposed to be raw, and I don't know if they would have cultured very well.

Posted by Silani Wahlgren at 8:15 PM